How to love running 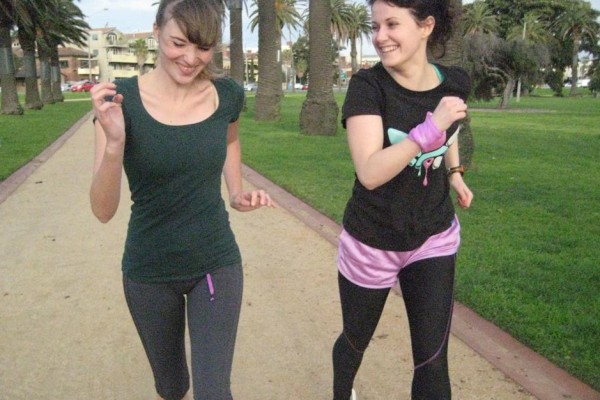 Of all the exercises I discuss with my personal training clients, the one which most frequently elicits an adverse response is running. When I mention running, a lot of people stiffen up, or even physically turn away. People tell me that they can’t run, or they hate running, or that they don’t want to be seen running because they can’t run, or something along those lines.

I understand. Running and I didn’t used to be friends either. I was not, and am not, a natural runner.

For a lot of us, if we weren’t gifted at sports in school, running carries with it memories of not being fast enough, not being coordinated enough, not being… enough. Running is tied up with shame and inadequacy in all sorts of surprising ways with people who otherwise have their shit together. They’ll present to a board of doctors or design a bridge or raise amazing kids, but tighten up at the thought of running at the park. Or, as they often see it, HAVING to run at the park.

There is another way.

Here’s how I learned to love running, on my own terms:

1) You don’t have to be a runner. It’s okay if you never want to run, ever. There are a million other ways to keep fit. If you need or want to take running off the table, for now, or forever, that’s okay. And you can always change your mind in either direction any time you want. Remember that always.

2) You don’t have to be “a runner” either, even if you do run. I’m not. I like to run sometimes, but it’s not “my thing”. I’m not particularly good at it, or passionate about it, it’s just a thing I like to do sometimes. You don’t have to turn into someone you’re not for running to be something you can do.

3) For those of us who don’t want to be “runners”, measuring your runs by how much you enjoy them is so liberating. Timing your runs can take the fun out of them (there’s a time and place for that, but the context of this article is about running with joy, not about running faster, longer, anything-er). Measuring your distance can turn some runs into “good” runs and some runs into “bad” runs, if you are a “Type A” kind of person. Who needs that? Any run is a good run. Any walk is a good walk. Check in with yourself while you’re out there, “Am I enjoying this?”, “Does this feel good?”, and let that guide you.

4) Learn to enjoy walking first. If you can, walk somewhere nice, where there are things to look at, even if they’re just other people’s dogs or fences or shop windows. Actually, there’s something to look at anywhere, when you’re a slow runner, unless you’re on a treadmill, but there is still hope (see below). Don’t go out for a run, go out for a walk, then allow yourself the freedom to jog only when it feels good, and you feel like it. Once you’ve had enough, return to walking. If you feel like breaking into another jog, go for it. Ease back into a walk when you’re over it. Your body is super smart and adaptable and after a while, without you even thinking about it, it will feel easier to go for a little bit longer, if you want to.

5) Running becomes a relaxing time when you listen to relaxing, up-beat music. You don’t have to listen to some kind of cheesy techno version Eye of the Tiger and rev yourself up – I like to chill out with some reggae, for example. If you can choose songs with positive lyrics, even better. Frame your walk/run/jog time as your “time out”. Remember you can stop and stroll any time you want, because you’re just out there chilling out and enjoying the feeling of moving.

6) You don’t have to go fast, or far. You can jog to the corner of your street, and take half an hour to do it, and guess what, you still jogged. Over time, you might feel like running for an extra ten metres. Or not. Doesn’t matter. It’s supposed to be enjoyable. It’s not your job to be a military seargant screaming at you to push through the pain. You can just explore what feels good and be kind to yourself and enjoy the feeling of movement. If you went through a bad breakup with running when you were younger, you’ll probably feel better to leave your watch at home. Who knows how fast you ran? Who cares?

7) You don’t have to enter a race. Some people love these and find them super motivating. That’s awesome. Personally, the idea of running with that many people around me. No. Just no. For me that’s like saying, I want to read a book in a crowded room of other people reading. Not so much. I don’t want “the man” holding me down with rules and start times and numbers on my clothes when I’m running. I just want to feel energised and get outside, and I have never, and will never have any interest in racing. You can decide what’s right for you.

9) You don’t have to run. Really. I’m saying it again. Because the biggest thing that puts me off running, is telling myself that I have to go for a run. I totally don’t! Any time I find myself saying that I “should” go for a run, I know that I don’t really want to, so I don’t. I go for a walk or do some other form of exercise that I feel like doing. Sometimes I don’t want to run for a few months at a time. But inevitably, I wake up one day and the weather is nice and I’m outside and DAMN I feel like breaking into a jog. And that’s when I really love it.

Fitness, Health At Every Size, running